HE★VENS (HEAVENS) is a group from the Raging Entertainment, the most prominent entertainment agency in Japan. In their original three-person incarnation, they were nominated to compete against ST☆RISH for the Uta☆Pri Award (うた☆プリアワード). They were introduced through a cameo appearance during the second season's 9th episode, and finally debuted during the next episode. On the final episode of the third season, 4 more members were introduced, becoming a seven-person group. During the fourth season, each member of HE★VENS paired up with a member of ST☆RISH for a duet song. They performed a new song, 不滅のインフェルノ, for the final of the Triple S Competition, and then went on to perform with both ST☆RISH and QUARTET NIGHT for a special live. 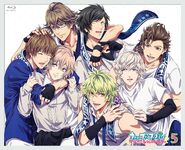 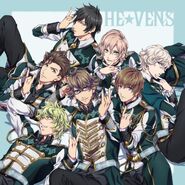 Retrieved from "https://utanoprincesama.fandom.com/wiki/HE%E2%98%85VENS?oldid=41843"
Community content is available under CC-BY-SA unless otherwise noted.