Hayato Ichinose, (HAYATO), sometimes called Ichinose Hayato (一ノ瀬 ハヤト, Ichinose Hayato), is said to be Ichinose Tokiya's identical twin brother. It is later revealed that HAYATO is merely Tokiya's stage persona. He is the primary reason Nanami Haruka enters Saotome Gakuen who hopes to make a song for the person who saved her. He is voiced by Mamoru Miyano (宮野 真守, Miyano Mamoru).

His overall appearance is identical to Tokiya's - dark blue hair and blue eyes. The notable differences are HAYATO's spikier hairstyle, and the fact that HAYATO almost always has a smile on his face. His casual clothes as seen in the anime are the same style as Tokiya's, but his stage performance clothes are frilly and flashy. According to Otoya, HAYATO's outfits are "frilly and bright" with "sequins that burn the eyes," and "definitely won't fit Tokiya's image".[1]

His personality is the complete opposite of Tokiya's - he is outgoing, happy-go-lucky, bright, and cheerful. According to Tokiya, HAYATO's positive personality is similar to Otoya. He likes adding "~nya" to the end of his sentences and makes random phrases such as the famous "OHA♪YAHHO~!!" Some people think his personality is cute, while others think that he is suited to be a comedy artist.

It is said that HAYATO enjoys singing, but didn't get a true passion for it until after his leg was injured in an accident. While he was in the hospital, he heard a boy from the hospital sing Amazing Grace, which he sang along with. The children came to idolize their "Onii-chan," which touched his heart.

His agency was pushing him towards dramas instead of allowing him to sing. His agency even made promises to him to let him sing, but later broke them and made him do autograph signings, commercials, tv dramas or whatever else they had instead and constantly told him that he wasn't going to be able to sing. The pressure he was feeling from his agency made him lose his "heart" in the way he sang, which is pointed out by his Ryuya when he is Tokiya, and also by Haruka and Satsuki at HAYATO's live concert. At the concert, Haruka notices HAYATO's bandaged foot and realizes that he is Tokiya, and that he's not a twin.

The next day, Ryuuya expels Tokiya from S Class on Saotome's orders, and Tokiya is transferred to A Class. Feeling frustrated after Saotome telling him that his debut as Tokiya might be cancelled, he goes out to sing Nanairo no Compass at the place he and Haruka first met. There he sees Haruka, who was listening to his song. Haruka tells Tokiya that his song was great, but Tokiya says that it's because he was singing as HAYATO, and if that he tried to sing it as Ichinose Tokiya, he'll fail.

At the beach gathering, Haruka confronts Tokiya, saying she likes the songs of Tokiya's "true self," and because of that, Tokiya manages to bring out his heart in his songs.

Later on in the series, when the time comes to choose a partner, the six main boys choose Haruka. She decides to make them a group so she doesn't have to choose and can be with them all. Once a few obstacles are cleared, they work together, but Tokiya is always late for rehearsal due to HAYATO work. He leaves Haruka worried about him because he almost passed out and he was burning up at the end of the day.

The next day, Tokiya dosn't come to practice at all because as HAYATO he passed out and didn't wake up until the next day. He talks to his company president who is angry at him since he joined Saotome, leading to a heart attack. HAYATO calls an ambulance for him. Once he's at the hospital, he tries to contact Otoya but he doesn't answer his phone because he is practicing his dance routine for the debut.

HAYATO talks to the company president, who says he considers HAYATO as his son. He apologizes for ignoring his feelings and asks if he is tired. HAYATO replies a no and leaves, as he leaves he sees his manager who also apologizes for not letting him sing like he wanted.

He then goes in a taxi and once again tries to contact Otoya. This time, Otoya answers the phone, however, Tokiya's battery dies in the middle of the conversation, leaving Otoya worried. To make matters worse, his manager goes on air and tells everyone that HAYATO is Ichinose Tokiya, and that he moved agencies.

The future members of ST☆RISH are mad at him for keeping a secret from them, but as he explains why he did what he did and expresses his love for singing and they forgive him and let him join the group. He is later paired up as Otoya's dance partner in their debut perfomance, allowing him to sing as Ichinose Tokiya.

In the game, he is still the same HAYATO that Haruka likes, and we first see him when Haruka watches "OHAYAHHO News."

He is mentioned next when Haruka bumps into Tokiya and mistakes him for HAYATO, and apparently a lot of other students also mistake him for HAYATO, despite telling them that they're twins. In the game, Tokiya is constantly compared to HAYATO, which makes him uncomfortable.

HAYATO later appears in June, when OHA♪YAHHO News came to Saotome Gakuen. Tokiya was chosen to be the reporter alongside HAYATO. Haruka met HAYATO on the roof and was interviewed there. He also asked her not to hate Tokiya since he’s actually relying on her, despite his harsh words.

In August, Haruka wrote a song for Tokiya, but he thinks that the song is actually for HAYATO, but Haruka replied that she wrote the song only for him, but the perfection he’s seeking probably lies in himself. After dozing off, Haruka wakes up to see HAYATO in front of her. According to him, he came to school looking for Tokiya, but he wasn’t around. He asked Haruka to play her song, and was impressed. HAYATO asked her if she can give the song to him instead of Tokiya, but Haruka apologized and said that the song is only for Tokiya. HAYATO said that Tokiya is a really lucky guy for having her as a partner.

In February, Tokiya took Haruka to his room and showed her a file containing detailed plans of a project involving HAYATO. At first he only acted out the plan because he loves singing and acting, but then he realized that the world only knows him as HAYATO — not as his real self. His agency also forced him to act as HAYATO even when the cameras aren’t rolling. He eventually got tired of all this, but he can’t quit so easily after they forced him to sing in a unit. This was the reason Tokiya lost his ‘heart’ when singing. He got so sick of it up to the point of wanting to die.

It was then when Shining Saotome appeared and gave him the chance to debut as Ichinose Tokiya, by enrolling into his school and winning the graduation audition. Tokiya noticed that he’s been trapping himself inside a frame all this time, and the reason he was so jealous of Otoya is because he doesn’t have any restrictions. Tokiya wants to reform himself from now on and asked for Haruka’s help.

March came. Tokiya soon told Ryuya and Saotome that he wants to put and end to HAYATO, then start from scratch after the audition. He’s also willing to wait if he can’t debut right now, and he will take care of his remaining jobs. Haruka felt lonely because watching HAYATO is her morning routine, so Tokiya offered to wake her up every morning.

The graduation audition finally came. Before his performance, Tokiya told her that he doesn’t want to lie to Haruka anymore and finally said that he loves her. Even if they can’t kiss in front of other people, he can always sing love songs for her. He asked her to listen to their song and stepped onto the stage.

Hayato has a younger identical twin brother named Ichinose Tokiya. Tokiya dislikes HAYATO and his happy-go-lucky Otoya-like personality, even calling HAYATO's movie "trash." According to him, they look at things differently, and Tokiya cannot keep up with his brother's senses. He also says that HAYATO is very busy, so he is rarely at home, lessening their interactions. In the game, HAYATO is seen to care for Tokiya, worrying about him being misunderstood by others due to his harsh personality. It is later revealed that Tokiya is actually HAYATO. 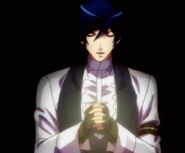 Retrieved from "https://utanoprincesama.fandom.com/wiki/Hayato_Ichinose?oldid=43248"
Community content is available under CC-BY-SA unless otherwise noted.