The first CD from the Shining Theatrical Troupe series, featuring Kotobuki Reiji, Mikaze Ai, and Shinomiya Natsuki, who are voiced by Morikubo Showtaro, Aoi Shouta, and Taniyama Kishou, respectively. It contains two audio drama tracks, one song track, and an instrumental track. The CD was released on December 25, 2013.

In a certain time period. The masquerade that was opened every night was the secret social meeting place for the noble.

Tonight, also, in front of the mansion, carriages appear one after the other. Beyond the doors are, a momentary world of dreams. Everyone dressed up beautifully, and enjoyed dancing.

Class and title were all behind the mask. It must be that no one knows who’s who. But, that is a masquerade.

The moment after we finish dancing, Is the person whose heart gets stolen, you, or me.

- A noble born from a good family. Always worried about his younger sister.

- A mysterious spectator who appeared at the masquerade. Talks in a cryptic way.

- A noble who came with Lazy. Has a personality that is calm and kind. 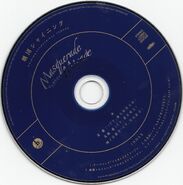 Retrieved from "https://utanoprincesama.fandom.com/wiki/Masquerade_Mirage_(CD)?oldid=29116"
Community content is available under CC-BY-SA unless otherwise noted.